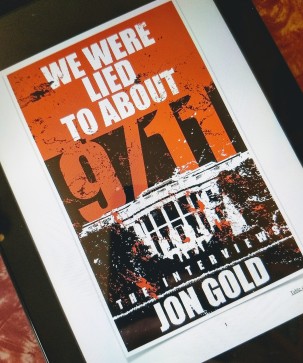 Jon Gold is an activist who describes himself as an advocate for truth and accountability for the attacks that occurred on September 11, 2001.  He has done extensive research on the subject and has been a vocal activist for years, demanding transparency regarding the attacks and everything that has happened as a result.  He is also a strong advocate for justice for those affected by the attacks.

Nearly four years ago, Jon began releasing a series of interviews titled We Were Lied to About 9/11.  In those interviews he speaks with many different people who present a variety of perspectives and knowledge about 9/11 and related events.  People such as whistleblowers, family members of victims of the attacks, scholars, authors and journalists, among others.

There is an incredible amount of information in these interviews, much of which received little to no news coverage in the years since the attacks.  Important, eye-opening information.

I and a number of my colleagues feel that much of this information has been suppressed or not widely circulated, leaving a large gap in what the general public knows about much of what occurred before and after 9/11.

Now, Jon has compiled transcripts of these interviews into a book by the same name and he’s giving it away for free.  You can download a copy at wewereliedtoabout911.com.

This isn’t a book of wild theories about how the attacks occurred or who was responsible for them.  It is a book full of information the commonly accepted official narrative of September 11, 2001 leaves out.  Information that will change how you look at the events of that day, and all the events that have been a direct result of it.  Get a copy today, read it and share it.

5 thoughts on “Jon Gold releases book full of information about the September 11, 2001 attacks–and he’s giving it away for free.”