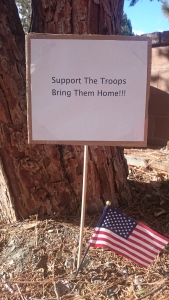 Dear Members of the US Military, Active and Retired,

It’s Veteran’s Day.  A day to honor those who have served as heroes, a day that has become overwhelmed with military pageantry, a day that has lost its original purpose of remembering those who died and celebrating the end of war.  And it is a day I have to ask, are you my hero?

As a child of a Vietnam War veteran, I am very aware of the sensitivity around this subject.  The only time I saw my father shed a tear was when he was discussing with me an essay about the Vietnam War Memorial Wall that I wrote in the 7th grade.  I don’t remember his exact words, something about honoring those who served, those who died.  Something about how those who had served in Vietnam had waited a long time for that honor.  As he spoke, I was startled to see a tear drop onto the page, and that tear haunts me to this day.  It has taken me a long time to reconcile the feeling that I’m supposed to support the troops with the fact that I am opposed to what the troops are doing.

We all make decisions in life, we all choose the path we will walk.  I have made many, many bad choices, some due to ignorance, some due to fear, some due to not really considering the repercussions.  And the truth is, I nearly made the same choice as you, I used to want to enlist.

One of the first things I can actually remember wanting to be was a fighter pilot.  I loved WWII era airplanes as a kid.  And I developed an obsession with Vietnam War stories when I was eleven or twelve (curiosity about what my father had experienced, perhaps.) and one of my favorites was a series of books by Mark Berent that involved a fighter pilot and a Forward Air Controller, and I fell in love.  I’m sure the movie Iron Eagle had some influence too.  I was determined to learn to fly, and a kind school bus driver who had a little, homemade, two-seater airplane took pity on me and took me flying a couple of times.  I was hooked.  I was more than ready to join the Air Force in order to fly.  I wanted to be the first female fighter pilot (maybe there already were some, but we’re talking about grandiose childhood dreams of glory here.)  This was my goal for many years, until I turned 15 and headed for the DMV for my learner’s permit.  I was forced to admit that I needed glasses and my dream of being a fighter pilot was smashed, like many pairs of my glasses in the following years.  After a suitable period of grief, I moved on.  I read the book Chickenhawk by Robert Mason and decided I would fly helicopters for the Army.  Once again I was more than ready to enlist.  And by no means was I unaware of what exactly happens in war, as I said, I was obsessed with war stories, gore and all.  I knew what these aircraft were meant for, and I was still willing to enlist to reach my goal of flying.  Then I learned about scouts who go out ahead of the front lines to scout out the enemy, and for some reason I thought I would like to do that too.  But, women weren’t allowed jobs like that, so it was obviously not an option.  I don’t know what would’ve happened had I been a boy.  I don’t know what would’ve happened had my eyesight been perfect.  I don’t know if by the time I was 18 and graduated high school I would’ve still wanted to enlist.  I was, after all, easing into my hippy phase by then.  I do know now that I’m extremely glad I didn’t enlist.  But, because I chose a different path, I can’t address these seemingly never-ending wars from the perspective of someone who has served in them.

All of these things have made me hesitant to address this.  Who am I to preach at any of you who have served in the military?  What right do I have?  Well, this is America, where at least for now, we have the right to state our opinions.  And as a concerned American, I can no longer keep silent on mine.

I don’t wish to offend or dismiss anyone who has served in the military with what I have to say, though I’m sure it will offend some.  I believe that most of you are willing and courageous people.  I believe you have done many heroic things, saving lives, protecting civilians, providing assistance in disasters, raising your children, and so on.  I respect and admire the desire to serve the people and to protect those you love.  I share those sentiments.

But, I find nothing heroic about the wars our country is waging.  Nothing is heroic about invading Afghanistan, or Iraq, or Syria, or any of the 100+ countries we have military deployed in.  There is nothing heroic about dropping bombs on these countries or sniping the people in their streets.  This is not protecting me, or our country.  This is not about fighting the battle over there so we don’t have to fight it here.  These wars are about greed, empire, the filthy rich getting richer while the poor suffer and die.  The truth is, it is putting us at greater risk with the growing anger and hatred towards our nation.  It is eroding any hope of economic recovery and stability for generations to come.  And, it is tearing apart our society with devastating effectiveness.  People are coming home destroyed from these wars (according to a 2012 estimate, more than 20 vets A DAY commit suicide!!).  Broken minds, broken bodies, broken families.  Just like Vietnam.

So, my answer to the question is no, you are not my hero.  I cannot, in good conscience, thank you for your service.  Ultimately what message would that send, to the people around the world we are attacking?  To the kids nearing the age of 18 who are considering the decision to enlist?  To my own sons?  Certainly not the message that I vehemently oppose these wars.  I did not want you to fight, to kill, to die in these wars.  I am furious, and terribly sorry, that you have had to.  It has to stop!  I want to see your courage used for the every day heroic things that hold our society together, not squandered away in some foreign land so that mega corporations can become more mega.

I realize that many of you enlisted because you saw no other occupational opportunities, or you saw it as a starting point to reach your goals (like my desire to enlist simply because I wanted to fly.)  I realize that many, many, many of you enlisted because you saw the towers fall and believed you were doing the right thing to ensure that never happens again.  I realize the majority of us in this country are ignorant of many truths because we aren’t taught real history, the history that isn’t written by those who wish to control the narrative.  We certainly aren’t told much by our so-called free press.  I realize we live in this weird time where we glorify our military to an extreme degree and the history that we are taught glamorizes our past wars, glossing over the true costs.  I don’t blame you for your choice to serve, I have no idea why you made that choice, and, as I said, I nearly made the same choice.  It would be counter-productive anyway.  But, I am as tired of feeling like I have to support the troops, shifting the blame solely to those in charge, as I am of keeping my mouth shut in this mind-numbing society.  We all have to take responsibility for our actions, our choices.  We can choose to follow orders regardless of our conscience, or we can choose to make a stand and change things.

Since you are still reading, let me tell you about something I do find heroic.  Speaking out against these wars.  Many of you have and I thank you for finding the courage to do so.  I want more of you to do so, to tell the apathetic, desensitized people of this country that war sucks for everyone but the few who profit from it while sitting safely in their castles.  You have been there, you can tell it from the perspective of someone who has served.  Your voice is so important!

Let’s change the course our nation is taking.  Let’s refuse to fight their wars, but rather fight for our own peace.  We the people, let’s take a stand together, right now, before we are turned completely against each other.