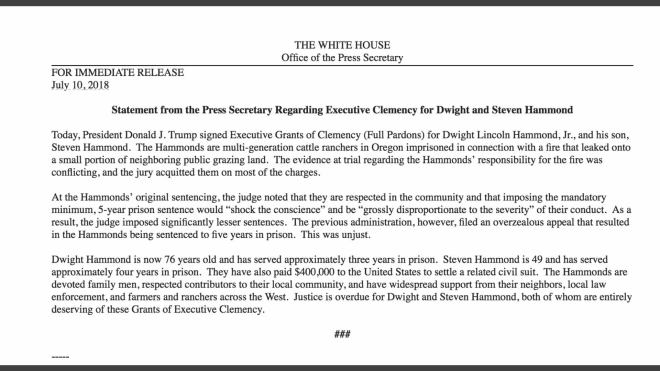 The Hammonds pleaded guilty in 2012 to two counts of arson on federal land which, according to mandatory minimum sentencing guidelines, should have resulted in five year prison sentences.  The judge in the case however, decided that a five year sentence would “result in a sentence which is grossly disproportionate to the severity of the offenses here,” and instead sentenced Dwight Hammond to three months in prison and Steven Hammond to one year and one day.

The federal government appealed the sentences.  The Ninth Circuit of Appeals remanded the case back to the Oregon US District Court where the original sentence was overturned and the Hammonds were ordered to return to prison to serve the remainder of a five-year sentence.

The Hammonds’ story gained national attention after Ammon and Ryan Bundy and supporters occupied the Malheur National Wildlife Refuge in Harney County, Oregon  The armed occupation began after a support rally for the Hammonds took place in Burns, Oregon.

The Bundys initially claimed they came to Harney County to protest the Hammonds’ return to federal prison and in fact they had urged Dwight and Steven Hammond not to turn themselves in.  The Hammonds did not support the occupation however, and willingly returned to prison in January 2016.