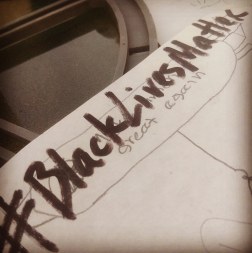 I’ve struggled with what to say since watching the footage of George Floyd dying under the knee of Minneapolis police officer Derek Chauvin.  I needed an outlet for the rage I felt, but could manage nothing more than some really bad poetry.

Since then, I’ve been watching events unfold with a range of emotions that have only made it harder to put words to paper about what’s happening in this country.  After all, it’s not my voice that matters in this fight, it’s my actions as an ally.

But there is something I want to address right now.  These protests, whether peaceful vigils and marches or more aggressive and even destructive movements, come from a deep well of justifiable rage.  People are out in the streets because they have been oppressed for far too long (since forever).  It is way past time to stop ignoring, or worse, co-opting their voices.

This isn’t some sort of new world order coup to take over the United States.  This isn’t a George Soros funded deep state operation conducted by Antifa activists.  This isn’t an underhanded plot by the Democrats to take the White House away from Donald Trump.  Stop with that shit.

Stop trying to steal the narrative.  Stop trying to co-opt an absolutely vital movement.  Stop believing that black and brown people can’t rise up and force change, not because they are driven by some sort of behind-the-scenes diabolical conspiracy to overthrow the government, but because they are legitimately more than tired of living the way they’ve had to in this country.

Just stop, and give this moment to the minority voices this nation needs to hear.  Amplify them.  If you can’t do that, then just be quiet and get out of the way.