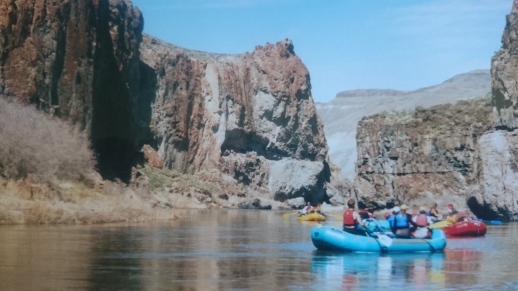 On Thursday, the US House of Representatives passed H.R. 2822, an appropriation bill for the Department of Interior by a vote of 231-196.  Attached to the bill is an amendment that will prohibit the President from declaring certain areas National Monuments.  One of those areas is the Owyhee Canyonlands.

House Democrats attempted to remove the amendment from H.R. 2822 but were unsuccessful by a vote of 202-225.

On his website, Rep. Greg Walden (R-Or) states, “The President shouldn’t be able to lock up thousands of acres of federal land to all productive uses with just the stroke of his pen and no say from the people who are most affected. Some have identified the Owyhee Desert as a target for a national monument designation, and I have heard strong local opposition to such an action.”

According to this July 15, 2016 Argus Observer article, H.R. 2822 also includes a provision for “$480 million for payments in lieu of taxes, which provides money for county governments to offset losses in property taxes on federal land.  It will also delay “for at least one year further action on greater sage grouse and eliminates a proposed increase on grazing fees on federal land.”

That article goes on to say that the bill may face filibuster in the Senate, and President Obama has threatened to veto it if it passes the Senate in its current form.

You can read why I feel the Owyhee Canyonlands should not be declared a National Monument here.

On Thursday, June 30, 2016, the California senate approved a series of gun control measures.  On Friday, Governor Brown signed many of them into law to take effect next year.

These include the requirement that owners of magazines that hold more than 10 rounds must give them up.  They also make the sale of guns with bullet buttons illegal and require current owners of such guns to register them.  Additionally, the new laws will require that ammunition sellers be licensed, and that purchasers of ammunition undergo a background check and the purchases must be recorded.

The measures were pushed through the Senate in order to have them passed before the summer recess in an effort to “forestall a competing gun control proposal headed for the November ballot” according to this Huffington Post article.  That article goes on to say it was rushed through because Democrats “worried in part that Newsom’s [Lt Governor Gavin Newsom] initiative would boost turnout in November among Republicans who oppose gun control.”

This Mercury News article puts it this way:

Speaking to reporters after the vote, De Leon [California Senate’s top Democrat, Kevin de Leon] thanked Newsom for “keeping gun control on the front burner” and inspiring the Legislature to act.  But citing concerns that Newsom’s measure could fail, he insisted the Capitol is the best place to craft tighter rules for gun owners–not the ballot box.  In addition, many Democratic leaders worry that the measure could drive pro-gun voters to the polls in November and swing close congressional and legislative races.

A valid concern, considering that according to polls discussed in this Yahoo News article, in 2014, 63 percent of Americans believe guns make homes safer, and California protesters are already saying that they won’t comply with the new laws.

Don’t let those pesky voters decide for themselves!

These new laws passed in California, not unlike the passage of  Senate Bill 277 among others, are important as California often leads the way on such changes. If California sets the precedent, other states may follow suit.

The Yahoo News article linked above states, “long a legislative leader in the US on issues from energy to farming, California’s new gun control package also comes amid growing judicial concerns about so-called right to carry laws, which give officials little leeway in denying concealed carry licenses.  Last month, the federal 9th Circuit Court of Appeals upheld the right of California to control who can carry a concealed weapon, requiring ‘good cause’ to do so.”

There is a plethora of information available online regarding the effectiveness, or lack thereof, of gun control laws.  Here are just a few to consider, this article on assault weapon bans, this video, and this video, both on gun control measures.  You can also read what I wrote after the San Bernardino shootings here.