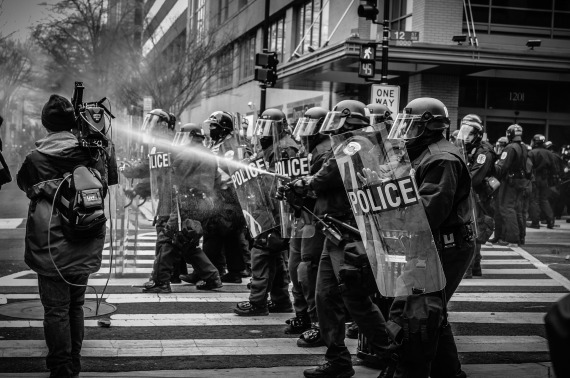 On Thursday, May 31, 2018, a juror sent a note to Judge Kimberley Knowles in a Washington D.C. superior court room informing Knowles that she had googled jury nullification after seeing the words “Google jury nullification” written in a bathroom stall at the courthouse.  She googled it, read about it, told the other jurors about it and then informed the judge of her actions.

This trial is the second of many planned for protesters arrested on January 20, 2017 during protests in Washington D.C. in which police officers were injured, windows were broken, and a limousine was destroyed.  Four defendants who allegedly participated in property damage that occurred during the Inauguration Day protests are currently on trial.  They are Michael Basillas, Seth Cadman, Anthony Felice, and Cathseigh Webber.

Six defendants faced felony charges in November 2017 but the jury in that trial acquitted them of all charges December 21, 2017.  In that trial, the prosecution made no effort to prove that the six defendants were guilty of any of the property damage, stating instead that “though there is no evidence the defendants caused any of the damage directly, the government considers the entire group of protesters to be responsible.”

The admission by the juror of googling jury nullification in this current trial comes after several major developments involving all the related cases, which are frequently referred to as the J20 cases.  On May 23, 2018, Chief Judge Robert Morin ruled “that the US Attorney had illegally withheld evidence from protester defendants.”  In what constitutes a Brady violation, the judge agreed with the defense that the prosecution had withheld potentially exculpatory evidence, specifically the fact that a highly questionable video created by Project Veritas and used as evidence against all the accused protesters was heavily edited.

According to a motion for sanctions and dismissal filed by the defense in a related trial scheduled to begin June 4, 2018, a portion of video that was edited out actually showed an undercover officer stating, “I was talking with one of the organizers from the IWW [Industrial Workers of the World] and I don’t think they know anything about any of the upper echelon stuff.”  The defense argues the following in that motion:

“This is exculpatory evidence to the defense. The government plans to argue that Mr. Petrohilos and everyone else at that meeting were intending to plan a violent protest. What better exculpatory evidence for the Defense than the words from the person sent to capture a nefarious meeting stating right after the meeting, ‘I don’t think they know anything’. This evidence is clearly exculpatory and but for the Court compelling its production, Defense would have never received it.”

Such Brady violations could arguably be considered cause for a mistrial for these cases but Judge Knowles has opted not to do so in this trial.  Numerous other cases have been dismissed and felony charges against some defendants have been dropped after Judge Morin’s ruling.

On May 31, 2018, Chief Judge Morin also ruled “that the US Attorney had misled him by not admitting the existence of 69 additional pieces of evidence provided by the far-right “entrapment” group Project Veritas” according to Unicorn Riot, an independent website that has covered these cases extensively.

And then came the admission of the bathroom graffiti inspired google search the day before the case went into jury deliberation.  Neither the defense or the prosecution protested this development and the judge proceeded with the scheduled deliberation.  Jury deliberation is expected to continue on Monday, June 4, 2018.

These trials present an interesting opportunity to exercise the right of jury nullification.  As Ryan J. Reilly, Huffington Post senior justice reporter, tweeted on May 31, 2018: “Jury nullification would be particularly powerful in this trial, as government alleges that three of the defendants engaged in some form of destruction. Unlike first case, jurors might want to convict on misdemeanors but not make them felons or expose them to lengthy sentences.”

This is a good reminder that jury nullification has been used in the past to acquit people charged for protest and dissent.  I wrote back in 2016 that “in today’s highly charged climate of political activism against war, police brutality, etcetera, combined with the prevalence of mandatory minimum sentences and increasingly over-reaching laws, the importance of knowing and understanding the right of US jurors to practice jury nullification cannot be understated.  It is critical that US citizens remember that the United States was founded on the principle of government that serves the people. A jury of peers, fully apprised of their rights and responsibilities as jurors, is one of the greatest protections of that principle.”

The importance of these cases should not be ignored.  As I wrote on December 8, 2017, regarding the first J20 trial, “this idea of collective liability is what makes this trial so important, and all Americans should be paying attention.  The mere act of charging so many, with the possibility of such severe punishment, threatens to stifle legitimate protest and first amendment activity.  If exercising one’s right to peacefully protest comes with the risk of felony charges for the criminal behavior of others, many will opt to stay home.”