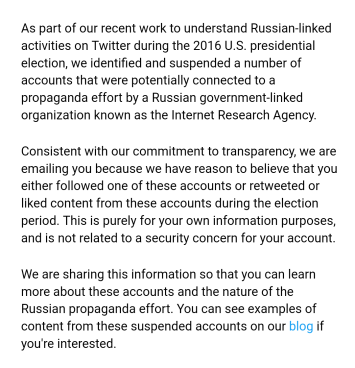 This is a portion of an email that was in my (and many others’) inbox this morning.  My first reaction was, no big deal.  I have no doubt I’ve encountered any number of bot accounts (Russian or otherwise) on Twitter.  I am constantly following stories and topics that expose some of the things our government does wrong, and has vested interest in keeping out of sight.  The sort of stories a foreign government wishing to sow dissent within our nation would undoubtedly want to push on social media.

I also know that I have been susceptible many times to social media memes that are considered anti-government because I happen to disagree with many of the things my government is doing, both here and abroad.  And, I do question the established, official narrative more often than not.  This leads me down many strange internet paths.

After thinking about this email more, however, I find it to be more than a little disturbing.  It’s like an early warning of greater surveillance to come.  A sort of, “we know who you’ve been talking to and what you’ve been talking about,” message, and if I’m not careful in the future, that can be used against me.

Not that it comes as a surprise that any (all) social media activity is monitored.  This email that so many received this morning is just such a friendly reminder of that fact.  An officially sanctioned admission of that fact.