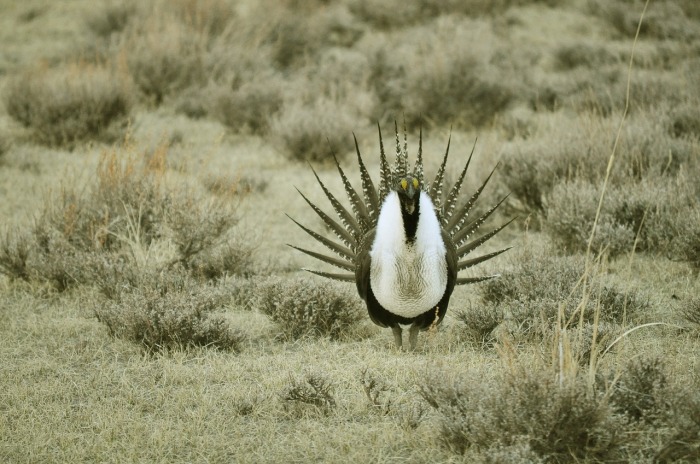 The Harney County Soil and Water Conservation District, or SWCD, won a national Landscape Stewardship Award in 2014 for their efforts in working with ranchers to improve greater sage-grouse habitat in the county.  Now, after the finalization of Oregon’s greater sage-grouse management plan, and months of seeking amendments to the plan, the ranchers and the Harney County SWCD have filed a lawsuit challenging the plan.

This collaborative effort to develop a management plan that would protect the sage-grouse population while also protecting the interests of industries such as ranching, mining, and energy development has been celebrated as a model effort for conservation throughout western states, but many are left unhappy with the final result.  Ranchers in Harney County feel as though their efforts have been ignored.

Travis Williams, a fifth-generation Harney County rancher, said, “we collaborated with NRCS, helping with local individuals, put together conservation agreements, the CCAA’s, that were models to the nation, did a bunch of work to save the bird, and they came back to us, didn’t look at our local opinions on how to address this bird.  It was a slap in the face.”

The Natural Resource Conservation Service, or NRCS, an agency of the US Department of Agriculture, started the Sage Grouse Initiative, or SGI, which is a partnership of ranchers, agencies, universities, non-profit groups, and businesses that work to conserve the sage-grouse through sustainable ranching.  The initiative was launched in 2010 and works to fund conservation projects in 11 western states to preserve sage-grouse habitat.

Oregon is home to 6.3% of the known population of male greater sage-grouse range-wide, and holds 10.9% of the bird’s total habitat, according to the Bureau of Land Management.  The Sage Grouse Conservation Partnership, or SageCon, is a collaborative group similar to the SGI that is working in Oregon for the same goals.  One of the ways these groups have made progress is through Candidate Conservation Agreements with Assurances, or CCAA’s.

According to the US Fish and Wildlife Service, a CCAA is a “formal agreement between the Service and one or more parties to address the conservation needs of proposed or candidate species, or species likely to become candidates, before they become listed as endangered or threatened.  Landowners voluntarily commit to conservation actions that will stabilize or restore the species with the goal that listing will become unnecessary.”  These agreements usually offer landowners some protection from future regulations in the event the species does become listed as threatened or endangered.

In Harney County, the SWCD worked as an intermediary between ranchers and the various land and wildlife management agencies to develop a CCAA.  Nearly 40 ranchers were willing to sign onto the CCAA, agreeing to a list of proactive changes to be made on private and public land in exchange for a 30-year delay to further regulations if the sage-grouse is listed as threatened or endangered.

Jeremy Austin, the Hart-Shelton coordinator for Oregon Natural Desert Association, or ONDA, says the Oregon sage-grouse management plan has great potential to reverse the decline of the sage-grouse population.  He said the collaborative effort set the gold standard for sage-grouse management in other areas, but its success will ultimately rely on how the plan is implemented.

Williams describes some of the changes he has made in his operations as being beneficial overall, saying, “what’s good for the cows is good for the wildlife.”  He has had contractors thinning juniper trees to prevent perches for sage-grouse predators, and this also results in more water for grazing forage.  He has been planting crested wheat grass, a non-native species that is more fire-resistant than native grasses, to create fire breaks which also help preserve forage for his cattle.

Williams said, “on our private land, we started fall grazing a lot more, combating invasive weeds and cheat grass, which I believe is working well.”  Invasive plant species are considered one of the greatest threats to sage-grouse due to the increased risk of habitat destruction through wildfire.  Grazing in the fall and winter months targets invasive grasses while most of the native perennial grasses are dormant.

While these changes have been positive over all, the ranchers still have concerns about many of the management plan’s requirements.  Both Austin of ONDA, and the ranchers, highlight the fact that this plan covers a vast amount of land managed by the Bureau of Land Management, or BLM, an agency they agree is hindered by a lack of personnel needed to complete all the necessary monitoring of the sage-grouse population and habitat.   Austin said this is one area where things might go wrong in the implementation of the plan as the BLM is limited in its staff.  The ranchers are concerned this will “provide a target rich environment for groups to challenge public land grazing.”

Harney County ranchers are not alone in their concerns, there are numerous federal court cases challenging the sage-grouse management plans developed in other western states filed by the livestock and mineral industries and by state and local governments.  A case has also been filed by a group of environmental organizations challenging the Idaho plan in federal court, arguing the plan doesn’t go far enough to protect the sage-grouse.

Williams said, “we finally have the chance to be on the offensive, and there’s mixed feelings in the county over that.  It’s becoming quite an issue, there’s some hard feelings right now.  But, they are going through with the litigation, the first money has been put out and got the lawyer hired, and it’s been filed in Washington [D.C.].”  He explained that one of the concerns raised against suing, saying, “some of the people that are against this litigation are saying we’re just opening it up for ONDA and these other groups to sue the BLM, but that’s going to happen anyway.”

Austin said the Oregon plan is really good compared to plans in other states, and he doesn’t see any lawsuits against it on ONDA’s horizon.  He added that ONDA will closely watch how the plan is implemented, but at this time he doesn’t see a need for environmental groups to challenge the plan in court.

The ranchers in Harney County believe the BLM violated its own procedures for land and resource management plan development under the Federal Land Policy and Management Act, or FLPMA, and the National Environmental Policy Act by not considering the local alternative plan for protecting the sage-grouse.  According to Williams, “there are 11 points that should have been part of the decision, and the process, but were not.  They [BLM] are in direct violation of this process, their FLPMA documents state they need to coordinate with the local officials, but they haven’t.”

Oregon’s greater sage-grouse management plan will likely face even more challenges as its implementation takes effect.  The collaborative efforts to create a plan that works for all involved highlights both positive changes in land use, and the deep frustration felt by industries trying to survive under increasing regulations.  Williams expressed this frustration as he described the years of collaborative work.  “We tried to make them meet us in the middle.  With collaboration, you are kind of giving and taking, and we’ve been giving a lot more than we’ve been taking.  For years.”