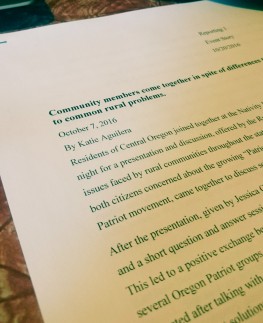 Today, for the first time in years, I had a homework assignment due.  When I say years, I mean more than a decade.  I have no idea what sort of grade I will receive for my work, but I enjoyed doing it.  This assignment was to attend an event and report on it as if I was writing a piece for a newspaper.  Not an easy thing for me as a blogger who enjoys a lot of freedom to editorialize all I want, and as a novelist who has the power to kill off any character that disagrees with me.  But the challenge is what made it so fun.

I chose an event that I thought would be interesting to me personally, but also worth writing about here at seeking redress.  I chose to ‘report’ on a presentation given in Bend, Oregon, on October 6, 2016, by the Rural Organizing Project.  There is a lot I would like to say about this presentation, about the atmosphere in the room, about the security team present, about this organization, about the responses I heard afterwards…but that was not the purpose of this assignment, so maybe another time.

I really wanted to focus on something positive that I saw during this event.  So, for my homework assignment, this is what I reported:

Community members come together in spite of differences to discuss solutions to common rural problems.

The Rural Organizing Project gave a presentation Thursday night in Bend at the Nativity Lutheran Church as part of their statewide “Beyond Burns: the Growing Patriot Movement” tour.  Following the presentation and a short question and answer session, members of the audience were divided into smaller groups to discuss the issues presented.

This led to a positive exchange between Central Oregon residents concerned about the Patriot and militia movements and leaders of several Oregon Patriot groups.  Both groups agreed they share more common ground than expected after talking with each other.  In spite of their different opinions, all agreed that further dialogue about solutions to local problems was both possible and necessary.

The presentation was given by Jessica Campbell, co-director of the Rural Organizing Project.  The problems she discussed included the lack of funding for basic services like emergency dispatch services, full time law enforcement services, the lack of jobs, and more.  Campbell explained how these often lead to numerous problems, including a growing sense of discontent and disenfranchisement in rural communities.

Campbell explained how Patriot and militia groups seek to fill these voids in order to spread their message and recruit new members.  These groups often organize community service projects to gain support and also work to get politicians supportive of their goals elected to local offices.

A brief introduction of various groups such as the Oath Keepers, Oregon Three Percenters, Constitutional Sheriffs and Peace Officers Association, and the Pacific Patriots Network was given.  Campbell went on to discuss confrontations that have occurred between these groups and law enforcement over the past two years, from Cliven Bundy’s standoff with the Bureau of Land Management in Bunkerville, Nevada in 2014 over cattle grazing fees, to the occupation of the Malheur National Wildlife Refuge in Oregon earlier this year.

Another confrontation Campbell discussed occurred near Galice, Oregon, at a mine known as the Sugar Pine Mine, where various militia groups sought to prevent the Bureau of Land Management from shutting down operations at the mine.  This incident, occurring near Campbell’s hometown of Cottage Grove, brought the growing movements to Campbell’s attention, and led to Rural Organizing Project’s partnering with Political Research Associates of Somerville, Massachusetts, to co-produce the report, “Up In Arms: A Guide To Oregon’s Patriot Movement.”

People attended the presentation for various reasons.  Connie (Smith*) of Bend, said she came because she is concerned about the “mainstreaming of the [Patriot] movement,” and explained that while it is easy to recognize a member of a militia visually, it isn’t easy to recognize politicians supportive of the movement who are running for office.

Bj Soper, also of Redmond, and founder of the Central Oregon Constitutional Guard and co-founder of the Pacific Patriots Network, said a lot of information was left out of the presentation, specifically in regards to the Sugar Pine Mine incident and another incident discussed that occurred at a mine in Montana.  However, he agreed the community could work together to solve problems faced by rural areas, stating, “we’re crazy not to try.”

The Rural Organizing Project was formed in 1993 in an effort to promote liberal democracy in what has largely been considered conservative rural areas of the state.  It began as a network of over 40 human dignity groups and formed a permanent staff to facilitate local organizing, communication, and political analysis.

The group will host four more presentations around the state, in Canyon City on October 7, Baker City on October 8, Lostine on October 9, and finally La Grande on October 10.  More information about the group can be found on their website at www.rop.org.

*I neglected to ask Connie her last name while speaking with her.